Summer of Love begins Sunheart's 2021 publishing season. A 7 1/2 minute mini-rock opera, it tells the story. On your streaming platform of choice, or at Summer of Love

Posted by David Sunheart at 6:41 PM No comments:

Exciting news! Sunheart will be playing the Community Village Stage at this year's NOCF 2020 virtual celebration. Large social gatherings like the Oregon Country Fair are not allowed this year due to a global pandemic, but where there is a web site, there is a way. We will be featured on the Oregon Country Fair web site on Saturday, July 11, 2020. We will keep you posted on the exact time as soon as we know it.
Posted by David Sunheart at 1:39 PM No comments:

Email ThisBlogThis!Share to TwitterShare to FacebookShare to Pinterest
Nearing the end of our year of publishing now, we have published song number 60, One Hand Drumming. This song started as a cosmic rap and/or directions for playing together by our drummer, Jeffy "Zen" Alberts, at a rehearsal in 1995, and became a Sunheart classic theme song. David plays three different acoustic guitar parts on the accompaniment, and Dawn plays a repetitive descant part as well as s full set of lead guitar solos.
Posted by David Sunheart at 1:35 PM No comments:

Welcome to the Earth

We have now published song number 28 in our year-long song-a-thon, called Welcome to the Earth. This song was a live studio recording with David, Omni, Dawn, and Fiora all singing together in one room. Later, we added lead guitar with Dawn, Nanda on traps, and had all  the singers do non-live vocals tracks. I ended up mostly using the live vocal tracks, just using the "clean" versions for backup, and reinforcement. It turns out, there was some magic in the four of us singing together in the same room that night. In fact, a previously published song, MoreThan Anything, came from that same session. It also had the magic. Omni came in right before we published with some spaceship sounds and bells. The spaceship sounds were what she always heard in the song, but didn't have the technology to do live, so she would just use her voice to make spaceship and wind sounds. In this version, we have real spaceships and wind. I also recorded a new bass guitar track in 2019. I discovered that tuning the bass to DGDG instead of EADG made this song, which is tuned down two frets, really work. 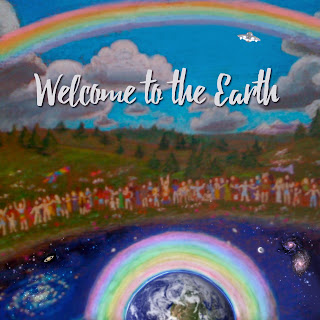 Posted by David Sunheart at 7:20 PM No comments:

Bound For Glory? Well, maybe. Actually, I'm not bound at all. Hey, we are now up to published song number 22. They are all available on the home page and the home page of our web site sunheart.org. We're trying to get a new song up every week. This week I am working on Millions Now Know, which has bells, tabla and traps by our drummer, Nanda Dulal Das, and a sitar track by the late, great Matura Seva. Stay tuned.
Posted by David Sunheart at 8:00 AM No comments:

Sunheart is in a new phase. We have material recorded as far back as 2010, and more recordings made at Mothership Studios, Sunheart's home base, in the intervening years. We are now in the midst of producing and  publishing all these tracks. Our goal is to publish a track every week until the backlog is absent or miniscule. Then,...well, we'll see about then then :)

The latest track to be on its way to worldwide distribution is David's pop-hip-hop track, I Am Here Today. Give it a listen! - David Sunheart
Posted by David Sunheart at 2:24 PM No comments:

David Sunheart
Guitarist and band leader of Sunheart, David is also a live sound and recording engineer with an affection for analog electric guitar effects. The "crown jewel" of his "rig" is his extremely vintage Stick Enterprises Patch of Shades, the ostensible topic of the blog Patch of Shades. He also blogs the bliss of his band, Sunheart, here.